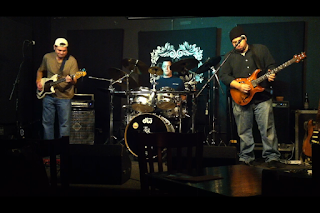 Dave: "We will be playing only requests for the rest of the night"
Jake: "It'll be just like Storytellers, except we're not a big band"
Brett: "And we don't really have any stories"

At the end of what was probably the most tragic day in Connecticut's recent history, GM helped us take our mind off the news and boosted a little holiday spirit.  I think it was just what we all needed.

This show features the triumphant return of "Whale".  You know, the original fast paced punch-you-in-the-teeth version.  This is how I prefer my Whales.  After "Whale" is over I want to feel like this just happened:

Check out its seamless segue out of fan favorite "Enemy" below.

This show was the bands debut at The Outer Space in Hamden, CT.  It featured the debut of "Nobody Told Me" (John Lennon).  No bass fires were reported at this show.

Some other vids from Friday night:

Stay tuned for my 2012 wrap up featuring tons of videos and pics left over from the arguyves.