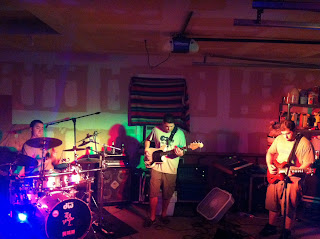 Guy Malone was destroying jams (re:Cry) like this basketball did to Mama Fratelli's head:

Corrina (Taj Mahal), Pepper (Butthole Surfers) and Fire on the Mountain (Grateful Dead) were all debuted. No bass fires were reported at the show.

You've Got to be Badass

Excerpt from a recent interview with Dave Grohl:
Q: Now, thinking about where the music industry is headed — subscription services instead of downloads, and the whole idea of making money off a record really being challenged – how does that fit into your “do it yourself” philosophy? What would you tell four guys in a garage with a good batch of songs today?
A: To go play it live. Just play live. Honestly, if you’re good at what you do, people will recognize that. I really believe that going out and playing good songs live as a great live band will make you successful, and it doesn’t matter if you’re at the shit hole down the street or you’re on the side stage of Bonnaroo or you’re headlining Lollapalooza. If you’re a great band with great songs, people will notice it. That’s it. It’s that fucking simple. Fuck product placement and fucking labels and A and R people and all that bullshit. It doesn’t fucking matter, I swear to God. And if you back that up with the idea that just playing those great songs in your great live band is enough reward for you, then you’re fucking set. But you’ve got to be badass. You just have to be really good.
As a drummer, I never felt like I was going to be on the cover of Modern Drummer magazine because I’m the best fucking drummer in the world. I just knew that if you put me on stage without a fucking PA or floor monitors in a small club, that I would beat the fucking shit out of my drums so much that people would go, “Damn, did you see that fucking drummer?” And I’d walk away from every show like, “There you go. I just beat the fucking piss out of those things, and people saw it.” So, by my thinking, at the end of the show I was a successful musician because I had achieved what I wanted to achieve.
I know lots of musicians that went down to South by Southwest and heard my speech and said, “Well, it’s easy for you to say.” I’m like, “Man, I was in the same fucking position you are in 24 years ago.” I worked in a fucking furniture warehouse, and I wanted people to like my music. So I played out as much as I could. And I really believe that if you are honestly passionate and driven and focused in what you do – if you’re really fucking good at it – people will take notice. That’s basically it. I don’t understand the industry. I don’t understand where music is headed. I don’t really understand technology. I just know that when you walk into a club and you see a band that blows you away, you are going to follow that band. You’re going to either buy that CD, or you’re going to find them online. Or you’re going to see them the next time they come to play, and that’s what it takes. You don’t have to stand in line at the song contest on TV to become a fucking popular musician. I mean, to stand in front of some judge who doesn’t even play a fucking instrument on their own damn records and have them tell you, “No, you’re not good enough?” Fuck that. Go blow people away in front of their face. I honestly believe it’s that simple.
Posted by cp at 10:18 AM 1 comment: